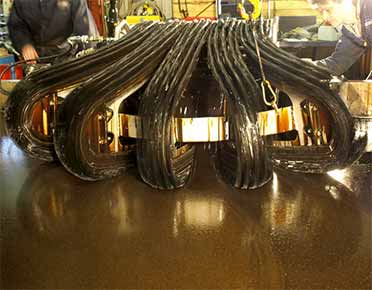 The new Giant Octopus offshore oil recovery system is a development of the popular Helix and Tarantula skimmers, and features a revolutionary new collection system containing 15 belt/brushes in 3 modules. These allow the skimmer a 360° oil recovery range, and the maximum possible collection surface area.

The skimmer has two powerful onboard DOP-250 dual pumps, and is able to offer high capacity skimming for offshore applications using well proven components and is more than ready for the toughest applications.

This powerful offshore oil recovery system is available as part of a containerised package to ensure that it is ready to be transported to site and deployed rapidly in the case of an emergency. Due to its revolutionary collection system, the Giant Octopus recovers less water than other skimmers during operation, thereby reducing the need for primary storage capacity when the skimmer is in operation. Through this, users which replace the skimmer head of similar capacity traditional skimmers with a Giant Octopus may gain a substantial saving in storage facilities such as barges, etc.

The Giant Octopus is the world’s most advanced offshore oil recovery system featuring the newest brush technology developed after more that 30 years of experience (Ohmsett independent testing and operations in actual oil spills).

The Giant Octopus is the first of its type combining high recovery and efficiency rates in all types of oil, making it a truly multipurpose system. Common to all three systems is the Giant Octopus skimmer head, the world’s most advanced recovery device. It consists of three splayed brush rail banks which are designed in such a way that the skimmer has a full 360 degree encounter with the oil. These brush rails also extend out well beyond the central buoyancy chamber of the unit, allowing free and uninterrupted access to the oil. Each brush rail has its own, independent hydraulic motor which ensures total control and operational reliability. The brush rails also work in a patented ellipse and extended arc. Each of these brush rail banks is also hinged that not only swing up for easy storage but allows the skimmer to also operate in icy conditions.

Other benefits of the brush rail system include the acceleration, trapping and pumping effect of the containment as it approaches the parallel sections of the bank. This further enhances the skimmers capability to collect a very wide range of oil from the light to heavy hydrocarbons. The external ‘bump’ bars are designed for the inevitable contact with ships side or deployment dock during deployment and recovery.

The Giant Octopus offshore oil recovery system is available in the following options:

DESMI’s extensive range of containment booms and oil skimmers supports their oil spill response solutions which are highly trusted in the industry. Whether the requirement is for offshore or shoreline areas; the arctic or equatorial environment, DESMI delivers proven solutions for all spill conditions and offers outstanding life-cycle costs.