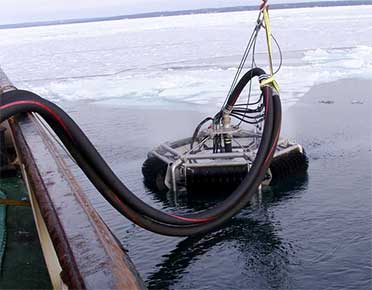 After three years of development, the Polar Bear ice skimmer has been designed and manufactured in response to increased exploration and exploitation of the polar regions – DESMI has recognised the need for a skimmer designed specifically to operate in these harsh conditions.

The Polar Bear ice skimmer is based on the popular HELIX skimmer, which was found to be a versatile machine and could easily operate in icy conditions with no ill-effect. However, this flexible design was modified and adapted to suit the harsh polar conditions and a stronger frame was added. This ice skimmer is now one of the most well-suited products available.

Due to having no external floats outside the collecting members (brush-modules), there are no restrictions when the Polar Bear ice skimmer interacts with the surrounding surface. The skimmer head is designed so that when operating in icy waters, the ice will be pushed aside and therefore cannot be trapped in the skimmer.

The design of the Polar Bear ice skimmer has benefited from a continuous development programme over three years. This results in a versatile, reliable, powerful and seaworthy oil skimming system that can be used in ice-infested waters.

The Polar Bear is a powerful offshore ice skimmer which, because of its compact hexagonal design, ensures optimal contact with the surface surrounding the skimmer.

DESMI’s extensive range of containment booms and oil skimmers supports their oil spill response solutions which are highly trusted in the industry. Whether the requirement is for offshore or shoreline areas; the arctic or equatorial environment, DESMI delivers proven solutions for all spill conditions and offers outstanding life-cycle costs.